This winter chopped salad is packed with plenty of roasted veggies, chicken, walnuts and orange slices! Finished with a delicious honey lemon dressing!

Gooood morning! I apologize for the lack of a post yesterday per my usual schedule. The obsessive planner in me died a little bit inside.

But I’m still in computer limbo right now and it’s totally stressing me out.

However, the lovely people at the genius bar *may* be able to fix my computer, which would be awesome. So for now, we wait.

Anywho, I’m currently working from my laptop and holding off on starting to transfer anything since it hopefully won’t be necessary.

My eyes are also going batty since I’m not used to editing photos on this computer and I swear it all looks completely different on this screen. 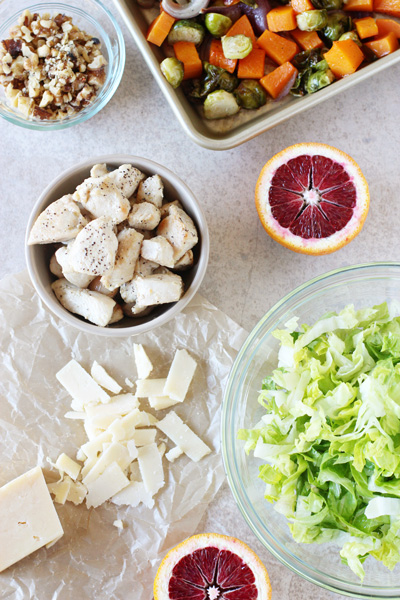 About This Winter Chopped Salad

But, I digress. Let’s talk about this winter veggie and chicken chopped salad.

You’re actually getting this post earlier than planned since the photos were still sitting on my camera and I hadn’t yet downloaded them to my busted computer. Which means you can have this delicious salad in your belly now!

So this salad actually started just as a way to use up some extra veggies I had hanging out in my fridge. And then we realized how much we liked it, I wrote it down / made a few changes and boom! Here it is to share with you.

It’s one of those salads that doesn’t feel heavy, yet at the same time fills you up quite nicely.

The base of the salad is a combo of roasted winter-ish veggies – like brussels sprouts, butternut squash and a little red onion.

There’s also some chicken and walnuts for a little protein and a light lemon-y dressing to tie it all together.

It’s finished off with a touch of shaved parmesan, which adds the perfect salty bite.

Now, I also added in some orange segments since I like a little sweetness and/or tartness in my salads (and I also can’t get enough of citrus right now), but the husband liked this salad better without it. 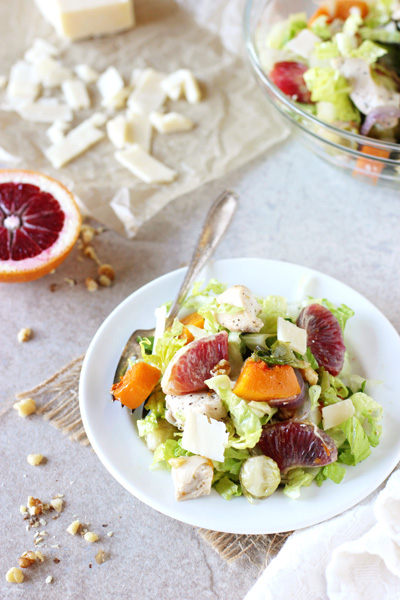 To make the veggies:

To make the chicken:

To make the dressing:

Prep time will be less if you use pre-cut butternut squash.

Rotisserie chicken would also be a great sub if you don't feel like cooking the chicken! 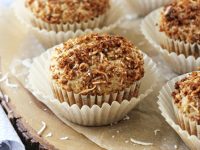 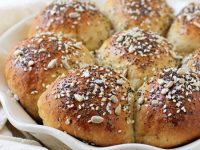