Recipe for pumpkin and brussels sprout gnocchi! With a creamy pumpkin sauce & pan-roasted sprouts! Have this cozy meal on the table in 35 minutes or less!

It’s official. I am 100% on board the pumpkin express for the season. 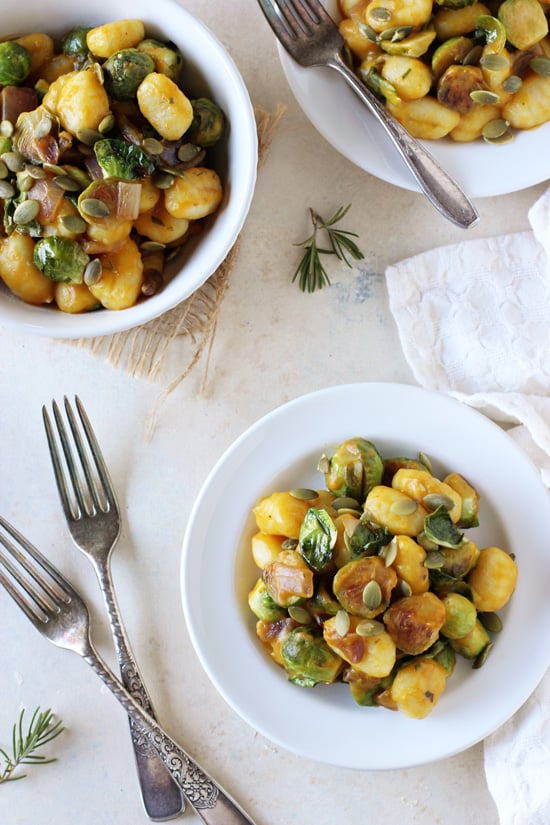 This has been cemented by the oh so chilly I-need-to-bust-out-scarves-and-boots weather that has officially descended upon North Carolina.

Although as I’m writing this, and procrastinating by checking the forecast, it appears that things are about to warm back up.

But too late! I’m fully in cozy mode! Bring on the fireplaces, blankets, slippers and another big bowl of this pumpkin and brussels sprout gnocchi.

Which we’ve had three times over the last three weeks. My husband is about to put the kibosh on any plans of mine to make this yet again. But me? I say bring it on.

Because friends, how can one turn down pillow-y delicious gnocchi mixed together with pan-roasted brussels sprouts and topped with a creamy dreamy pumpkin sauce?

He’s mad I tell you. Especially since you can have this on the table in just slightly over 30 minutes. 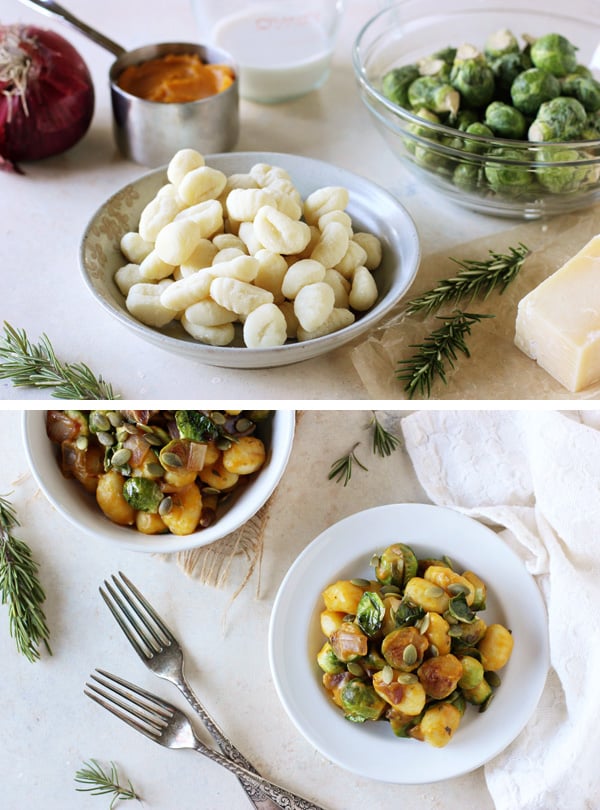 How To Make Creamy Pumpkin Gnocchi

We’ll start by cooking up some potato gnocchi in a saucepan. One of my favorite things about gnocchi is that they only take a few minutes to cook (they’ll float to the top of the water when done).

Meanwhile, we’ll pan-roast some brussels sprouts in a large skillet, along with some onion, garlic and honey (which balances out the sprouts perfectly!). Once tender and browned, we’ll move those gorgeous veggies out of the skillet and set them aside for a hot minute.

The same skillet goes back over the heat and we’ll simmer together some pumpkin puree, milk and broth. It’s so silky and creamy and packed with pumpkin (i.e. not so bad at all for you!).

Everything gets mixed on together, combining into sauce-y, pumpkin-y perfection.

*I’ve also made this using regular whole milk. If you go this route, the sauce will be a bit thicker (and a touch richer as well). You also will not likely have to simmer the sauce for quite as long, as it thickened up faster for me this way.

Other non-dairy milks will likely behavior more similar to the almond milk!