Recipe for a fall pumpkin apple crumb cake! With a soft pumpkin cake, sliced apples and a thick layer of crumbs! Made with coconut oil!

Crumb to the cake! I couldn’t let the holiday season pass without sharing a fun flavor of the wonder that is crumb cake.

Can you tell I have a thing for this baked goodie? I feel like I say this about a lot of food items lately. But seriously, my love for crumb cake runs deep.

Way back to my kiddo days when my dad would buy this absolutely scrumptious crumb cake from a local bakery that was piled high with just so many crumbs. So many crumbs!

It still makes me all dreamy inside just thinking about it.

But since that bakery closed down (I mean really, didn’t they know they needed to stay open just to provide me with cake??), I’m left with the task of baking it up myself. Which I suppose is not such a bad thing.

Especially during the sparkly, happy time that is the holidays!

Last year I shared this gingerbread crumb cake <— which is so spicy and awesome and christmas-y! Also, pretty sure I told the same story about the bakery in that post. Yes, yes I did. I’m a broken record.

So anyway, this year, I give you a fall, thanksgiving-y pumpkin apple cake! 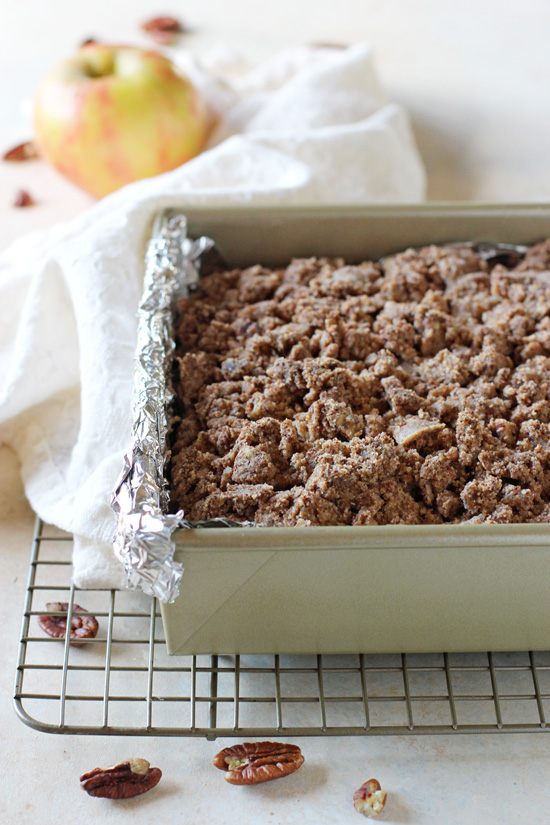 Now, since I seem to have this annoying minor dairy intolerance going on these days, I decided to see what would happen if I switched out the butter from last year’s recipe with coconut oil.

Some testing and minor changes later, I must say that I am pretty darn pleased with the result.

Aside from the fact that the crumb topping bakes up with just a slightly different color, I honestly couldn’t taste or see the difference. Success!

And! Today’s version also includes some white whole wheat flour and coconut sugar (in place of some of the all purpose flour and granulated / brown sugar).

Don’t get me wrong, I am by no means calling this cake health food, but I am all for little healthier swaps here and there.

So, the cake. Let’s discuss the components.

For the base, we have a layer of super moist pumpkin cake. Soft, fluffy, perfect. And full of plenty of fall spices.

We top that off with a layer of thinly sliced apple. Which adds just a little something something.

And then, it’s all finished off with that gloriously thick crumb topping.

And along with a big cup of steaming hot coffee? You’re looking at my second breakfast over the last few weeks. Don’t judge. At least my first breakfast is always a smoothie?

For the crumb topping:

For the crumb topping:

Be sure to melt the coconut oil first, then measure out the correct amount. Otherwise you may use too much.

I usually use parchment to line baking pans, but the foil works better here since the batter is so thick (it doesn’t slide around this way as you’re trying to even out the batter in the pan).

Because of the little bit of moisture from the apple, I’ve found that this stores best just wrapped in foil (either covered in the baking pan or on a plate). It also doesn’t keep quite as long as regular crumb cake because of the apples (but is fine for about 2 to 3 days). 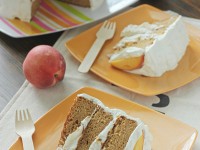 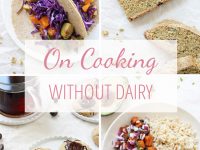 On Cooking Without Dairy (+ The Best Substitutes for Dairy!) 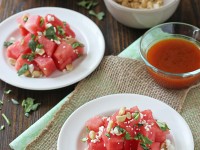