These easy bacon, brie and pear flatbreads are a delicious appetizer or simple dinner! With a crispy naan base, caramelized pears, flavorful bacon and brie, you really can’t go wrong. 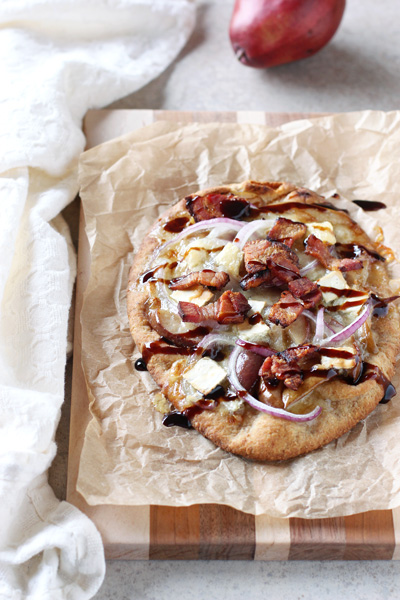 This coming from the person who is currently trying to cut down on her cheese consumption. I KNOW. I’m in cheese withdrawal. Okay not really. I may just like being a little dramatic.

But, the husband and I decided that we should cool it a bit with the cheese, you know, cut it back a tad.

Which of course is perfectly timed with the week that I have not one, but two recipes that involve cheese. It’s like karmic punishment. Staring at these pictures.

So let me tell you how awesome this recipe is, so all you cheese eating people can go run into your kitchen and make it.

I originally intended for these flatbreads to be a sort of appetizer, but then we ate them so fast the first time I made them that they ended up being dinner.

So. The moral of the story. They can go either way. Appetizer, dinner, whatever you like. 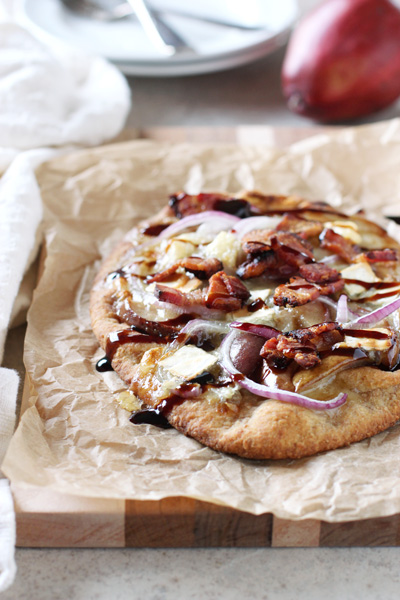 How To Make Pear and Brie Flatbreads

We’re using naan as the base here, because it keeps this dish on the simple side.

You’ll cook some chopped bacon in a skillet and then use the bacon grease to caramelize the pears. Yes, you read that right … bacon grease caramelized pears.

I’m not really a head-over-heels in love with bacon kind of girl but here, oh man, does it work. So if you are a bacon lover I’m sure you’ll be where I am … times ten.

So then, we take those pears and spoon them on top of the naan, along with a good sprinkle of sliced red onion and brie.

Pop them into the oven, where the brie gets all melty and gooey and runs a little bit all over the place – it’s wonderfully good.

And then when they come out of the oven, we’ll top them with the crunchy, crispy bacon and a nice drizzle of balsamic glaze for that touch of tangy sweetness. 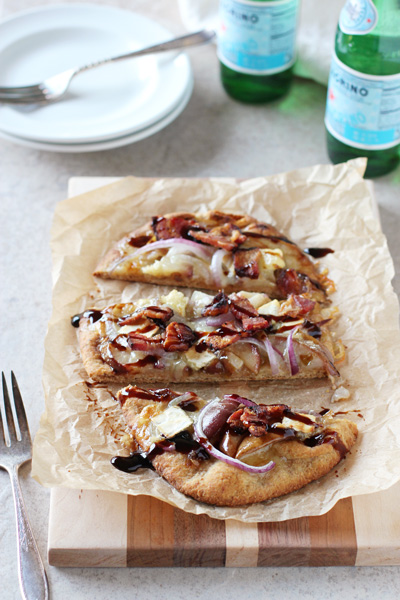 For the bacon / pears:

To make the bacon / pears:

As with all sorts of pizzas, sandwiches, etc. - feel free to adjust the amounts of the toppings to your own liking. 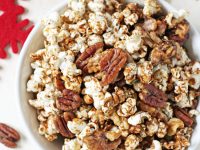 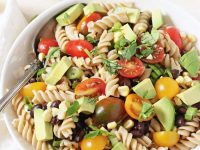 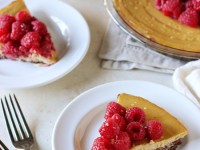