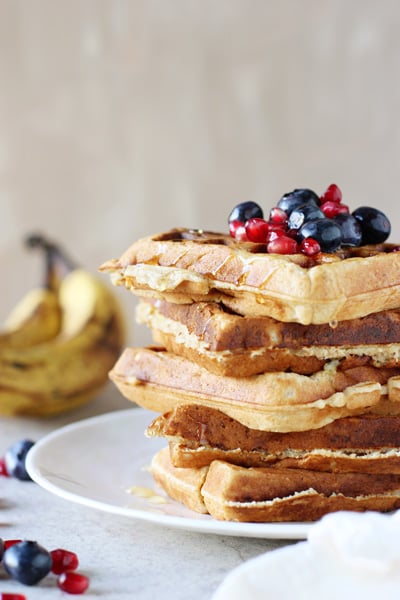 I feel like such a hypocrite posting these banana bread waffles.

Because as you may recall, this is coming from the self-professed banana hater. To be fair, I still won’t go near them on their own.

I don’t do raw bananas (is that what we call them? you know, like plain bananas all by their lonesome?).

But baked or cooked into something? I’m coming around. And *maybe* even starting to actually, truly, really enjoy them that way. It’s madness I tell you.

Because, yes, I still gag when mashing them up to put into things. True story.

So for now, we talk waffles. Maybe someday I’ll actually eat just a regular ol’ banana ((shudders at the thought of it)). 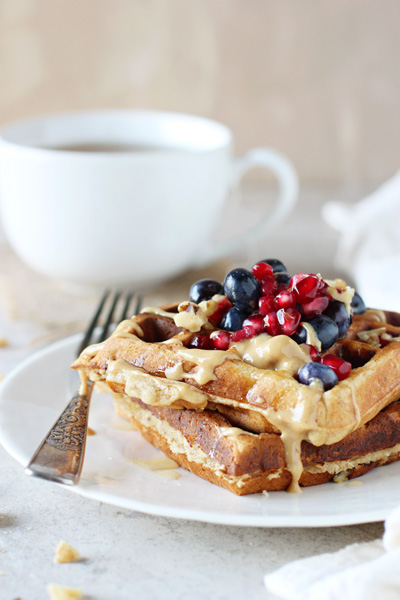 So. I have been trying to make an effort to take out my waffle maker more often. I even moved it to a place where it’s not such a pain to reach. Which has helped.

But as crazy as it may seem, we rarely eat them fresh out of the waffle maker (because this girl is way too busy being lazy on weekend mornings and never gets her act together in time for breakfast).

Instead I make a batch when I have time and freeze them. Leading to waffles for breakfast all week long. Happy dance.

I just thaw one out either overnight in the fridge or in the microwave and then pop it straight into the toaster. Crispiness ensues and it is delicious.

{PS if your waffle maker makes thinner type waffles, you could just pop it right into the toaster. Mine makes thicker ones and they don’t quite heat all the way through if I go that route.}

About These Peanut Butter Banana Waffles

So the base for these waffles is filled with plenty of banana, along with a little bit of spice and some creamy dreamy peanut butter. The banana taste is pretty prominent, while the peanut butter is more of a subtle background thing.

They aren’t overly sweet, which is exactly how I like them because that means … more toppings!!

My favorites? A healthy smear of additional peanut butter, a drizzle of honey, a sprinkle of walnuts and some fresh fruit. Just go ahead and make that happen. 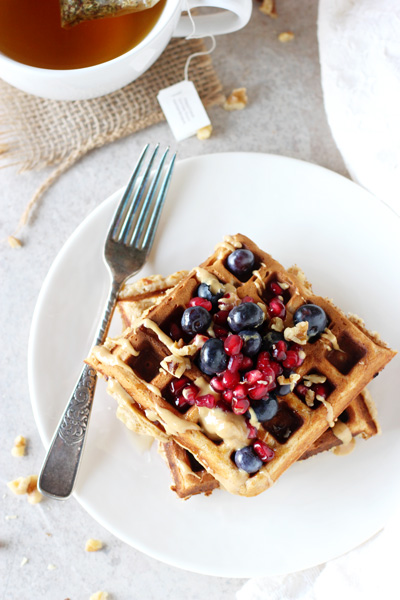 These waffles freeze really well. Let the waffles cool completely after cooking, then wrap each individually in plastic wrap. Add all the wrapped waffles to a freezer-safe plastic bag and freeze! 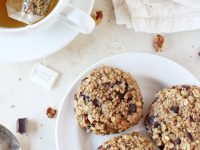 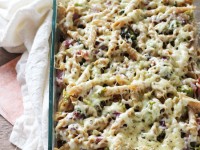 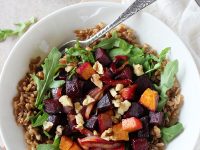